The “Tuckman Model” is a method used in corporate project teams and departments to enhance organizational strength.

The main purpose of the Tuckman Model is to deepen mutual understanding and trust among team members, and to improve operational efficiency and maximize profits by improving team strength.

So, what is the Tuckman model and how does it work?

The Tuckman Model for Forming Teams

The Tuckman Model is a method to be introduced for team formation, but how does it work for team building?

In this section, I will explain what the Tuckman Model is and how it can be used for team building.

What is the Tuckman Model?

The Tuckman Model is one of the team building methods, which was proposed by psychologist Bruce W. Tuckman.

The model categorizes the changing conditions within a team into five stages before the team is formed, and each stage can be used to determine the developmental status of the team.

The five processes until a team is formed

In the Tuckman model, the following five processes are considered to be necessary before a team can be formed.

Formation period
A time when there is little understanding or knowledge of each other.

Confusion period
A time when conflicts occur in order to achieve the team’s goals and objectives. Disagreements and mutual assertions emerge.

Unification Period
A period in which both parties begin to share their intentions to achieve the team’s goals and objectives.

Functional period
A period in which a sense of solidarity emerges in the team, and a mutually supportive relationship can be built.

Dissolution period
This is the period when the team dissolves and begins to work toward its own goals.

In the case of a long-term team or a team within the same department, there may be little or no dispersal period.

“Disruption period” is the key to the Tuckman model

In the Tuckman model, the success of team building depends on how to overcome the “confusion period”.

Here, we will introduce the importance of the confusion period and the key points on how to overcome it.

The reason is that how you overcome the confusion period will increase the unity among the members as colleagues who have overcome difficulties together.

In order to overcome a period of confusion, it is important for members to delve into the reasons for conflicts, discuss them, and summarize each other’s opinions.

For this reason, it is important to know how to overcome the confusion period, and to guide the members to listen to each other’s opinions as well, rather than only asserting their own.

Overcoming the “confusion period” will make the team stronger

In order to overcome a period of confusion, a leader is needed to organize the team.

It is important for the leader to take the lead in deepening the understanding among the team members and deepening their relationship so that they can mutually understand each other’s thoughts and opinions.

When conflicts occur during times of turmoil, what is required of the leader is to summarize the opinions of the team from an objective perspective.

If you favor opinions based on subjectivity or your relationship with the person, you may not be able to overcome the confusion and the relationship may become strained.

Therefore, the leader role will be required to take an objective viewpoint and show the direction to achieve the goals and objectives from among the various opinions extracted.

Goalous, useful for the Tuckman model

As a tool for activating the communication necessary for team building, Goalous is recommended.

Goalous is a social network type goal management tool. It has the advantage of facilitating information sharing and communication among members.

The open goal function allows members to share goals and monitor progress in real time, which is useful for building a system for mutual cooperation.

If you would like to know more about the Tuckman model, please refer to the following documents.

For more information on the Tuckman Model, please refer to the following documents: ▼ How to Maximize Performance and Achieve Results in Your Team: “Beyond Team Building” Download the document at here
“Beyond Team Building
https://www.goalous.com/intl/ja/contact_materials_useful_13

The Tuckman model shows the growth of a team in team building, and ultimately the key is whether the team members are able to build trust among themselves.

Since many of the tasks that a company undertakes basically depend on team play, it will be more efficient to work together rather than individually.

For this reason, the number of companies that focus on team building is on the rise.

In order to understand each other’s abilities, opinions, and ways of thinking, and to make the most of them, it is important to improve the environment by developing tools and training leaders. 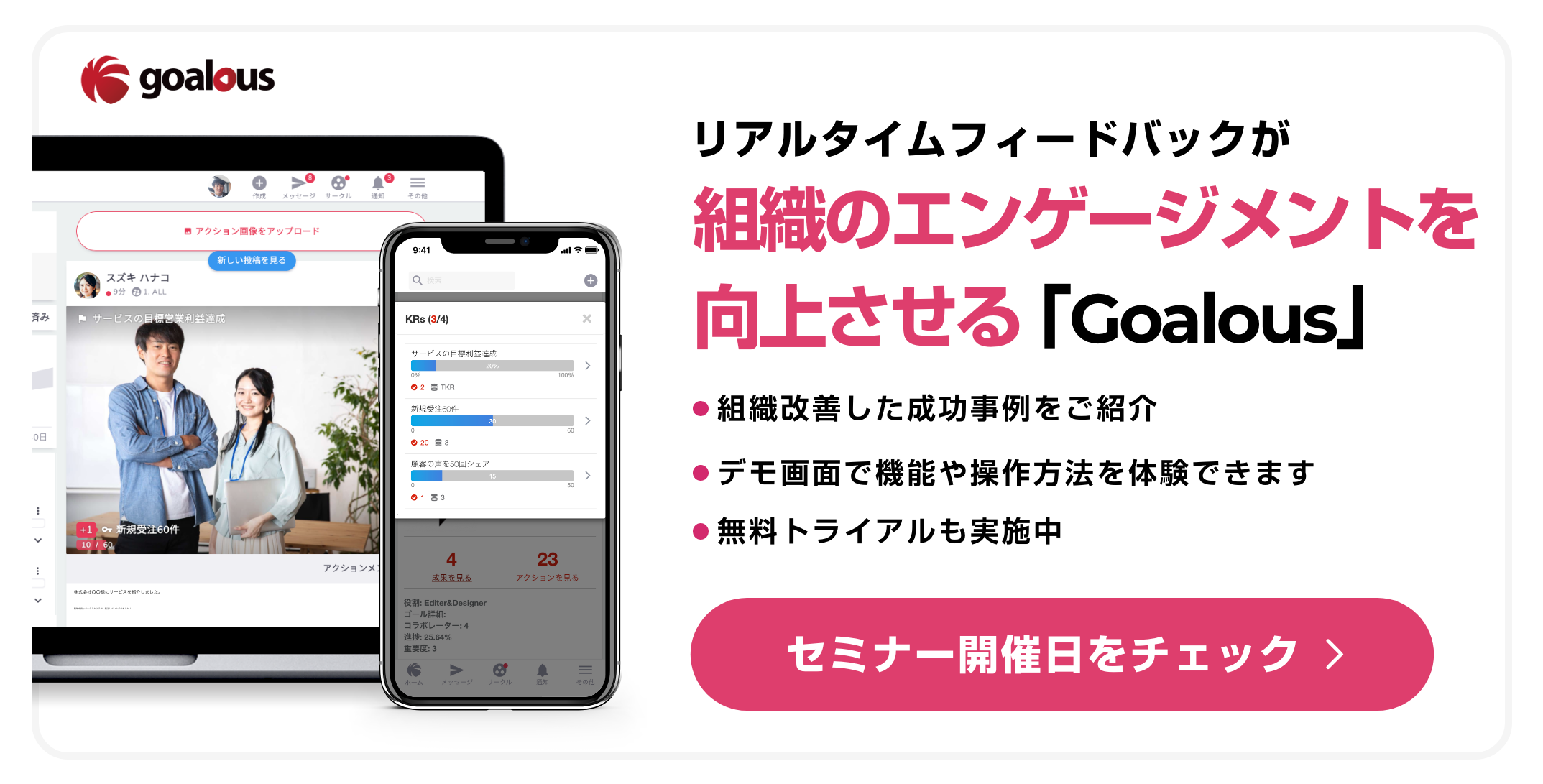