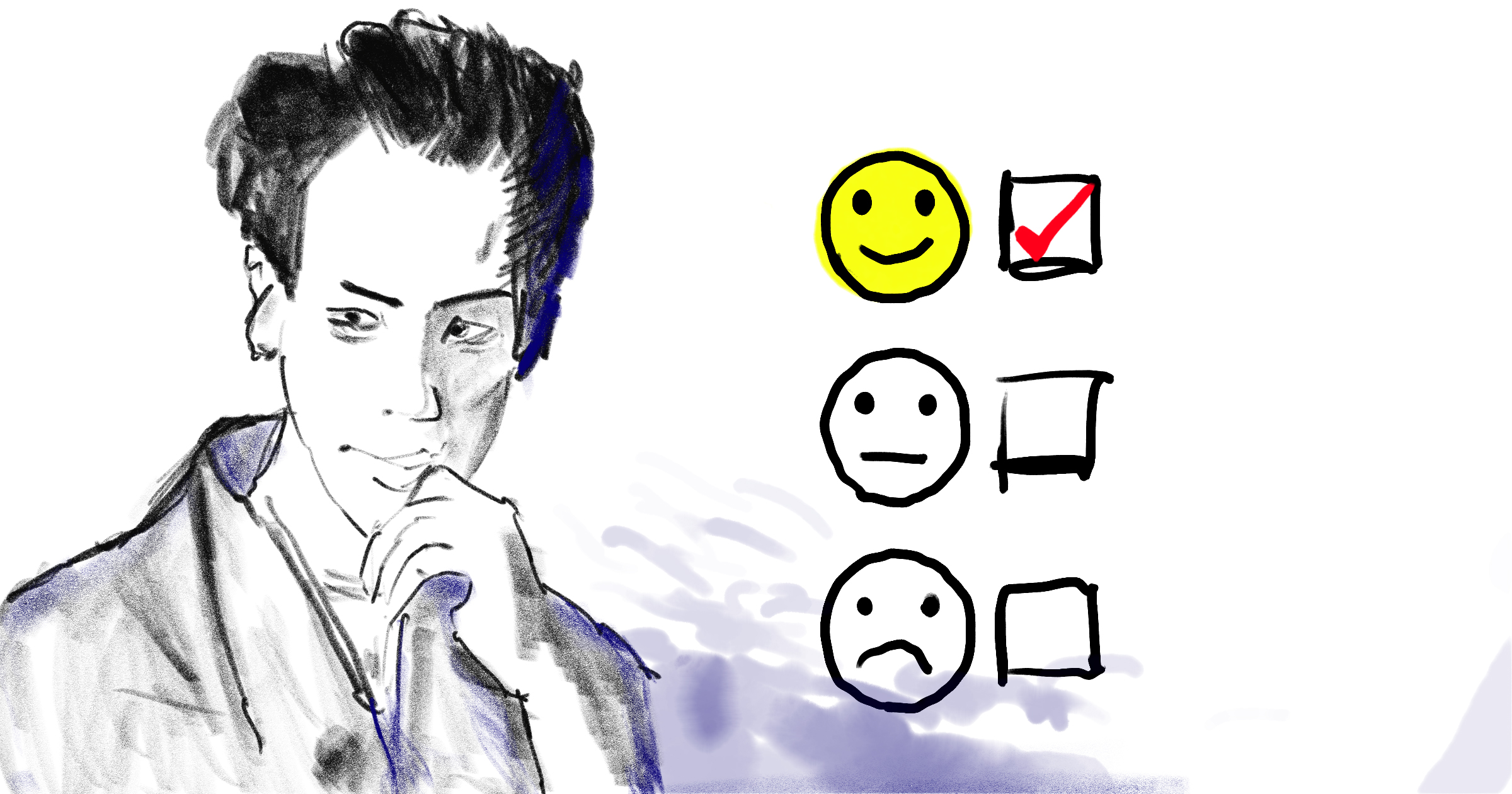 “What are some examples of feedback?” Everyone working on the team must want to refer to a sample of the actual voice. Many people are negative because of their thinking tendency, so you will want to know an example of positive feedback. You’ll want to know more about examples of turning negative feedback into positives! Yes, I will answer.

As mentioned earlier, first of all, I would like to confirm a premise. Positive feedback is 40 times more likely to increase engagement than negative feedback. Don’t forget. There is no need to be cryptic. Accept this fact honestly.

Also, people have self-talk, or secret conversations with themselves, about three to five times a minute. Ninety-five percent of our thoughts are made up of the same things as yesterday, and about 80 percent are negative, which means that if left unchecked, our thoughts are all [status quo x negative].

People innately try to maintain homeostasis, so the more negative (unchallenged) the less risky. In this overwhelmingly safe and secure habit of thinking, don’t you think there is a no-need for you to encourage negative thoughts in others by using negative feedback “for the satisfaction of your superiority”? At least not in a group with a culture that values challenge.

Be mindful of the “cause” of the result of increased motivation.

(B) If you drink 12 cups of coffee, you can get one cup free.
However, there are two stamps from the beginning.

Far more people got a “free cup” in B than in A.

Similar to what I mentioned before, this experiment shows that giving feedback on progress, on how close you are to the goal, was a pretty strong motivating factor.

As a side note, people often feel like they’re about to shit themselves. You don’t have to have such an experience (well, you should). Yes, at least I’ve had it happen to me a lot (well, a lot).
The closer you get to your “home toilet” goal, the more motivated you become to reach that goal in your anus and other organs, and the more violent your bowel movements become. In reality, it’s a needless rush. It may be a bizarre example of wanting to get closer to the goal, but suffering the closer you get.

This is probably offensive to non-Japanese people (or even Japanese people who don’t know me), so I’ll go back to the stamp I mentioned earlier, but the initial state of having two stamps gives the nice illusion of progress. This is because when you receive a stamp card, you feel that you have made progress from the beginning. The feeling of progress is the most powerful motivator.

Now, based on this fact, let’s come up with an example of feedback, shall we? Ah! I’ve suddenly decided to call good feedback “JIN feedback”, since “JIN” (a feeling of love and consideration for others) is a fundamentally important mindset when it comes to feedback.

There was a project leader who had barely made 20% progress on a certain outcome. The pace of progress is slow. You’re the manager.

Your project is still a long way from reaching its goal! You will not succeed with this kind of work speed. You should all talk more and work together on the tasks that the project members should focus on and execute.

Oh, don’t you feel like this manager is being brave and saying nice things? However, the reference to progress is completely wrong.

Read up on the patient’s symptoms and medical history and let the experienced and skilled doctors make the diagnosis. Which team excelled?

We didn’t do anything to them beforehand.

We asked them to read some medical articles beforehand.

We gave them some candy beforehand.

Team C diagnosed the problem twice as fast and accurately as the other two teams.

It’s better to work when you’re in a good mood, and you’ll work faster and make fewer mistakes.

As a businessman working in a team, the first thing you should do in the morning is to invite your team members into a good mood. I want you to be extremely conscious of “THE Invitation Ritual”. In the first hour of work, are you putting everyone in a good mood? This routine will produce wonderful results.

This is how you can uplift the other person’s mood by talking about their appearance.
“It’s raining again today. If you get thirsty, let’s go out for a drink together! And the world’s water shortage will be solved. We’ll be great.”
It’s not right, but it’s super positive.

In order for you to be able to speak up, you have to have a brain that can interpret everything positively. There are many people who are very skilled at being critical, but this is a difficult task for them. Criticism is also a very important spirit, but what we are essentially focusing on here is the human mind, the vitality of the team, and its collective strength.

In such a situation, the topic of appearance and natural phenomena may have its limitations. Is there any topic that would be more effective for businessmen?

In such cases, use feedback on recent work performance. Include a bit of good news. (If you’re still running out of things to talk about, you can always use candy!

Anyway, just one piece of candy in the morning can make “you” feel good and have a high performance day, so don’t be fooled. Let me give you a concrete example.

Yesterday, a programmer was working on a development project until late at night to complete fixing a bug. You are the manager and you want to know the details of the bug.

Hey, I see you spent a lot of time fixing bugs yesterday. By the way, what was the cause of the bug? I didn’t really understand your explanation yesterday. I’m sorry, but you’re going to have to tell me again.

We all know that spontaneity is deeply related to motivation. It is very important. If this is the case, you should not give instructions, orders, or even ask for help. Anyway, you should learn to say “let the other person make the decision,” because successful feedback is all about moving the other person in the best possible way.

Someone was putting together an idea to solve a problem in management. You talked to him and he convinced you that it was revolutionary and that you should start now.

Your idea is great, so please put it together once and hold a briefing for everyone.

After giving feedback in the form of an evaluation, “elicit” from them and let them decide for themselves. It’s okay if you guide them. It is important to take such a form.

Shawn Achor is an American author, and speaker known for his advocacy of positive psychology.

If you can raise somebody’s level of positivity in the present, then their brain experiences what we now call a happiness advantage, which is your brain at positive performs significantly better than at negative, neutral or stressed.
Your intelligence rises, your creativity rises, your energy levels rise. In fact, we’ve found that every single business outcome improves.

Your brain at positive is 31% more productive than your brain at negative, neutral or stressed. You’re 37% better at sales. Doctors are 19 percent faster, more accurate at coming up with the correct diagnosis when positive instead of negative, neutral or stressed.
If we can find a way of becoming positive in the present, then our brains work even more successfully as we’re able to work harder, faster and more intelligently.

A person’s day can change drastically with words and attitude. Ignoring them is the worst. Anyway, give feedback. With your feedback, you can control people’s intelligence, creativity, and vitality.